There are many rea 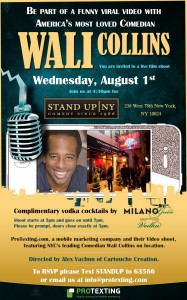 sons why you might want to be @StandUpNY today!

Want to attend a free comedy show? How about meeting Comedian Wali Collins and members of the ProTexting team? At the very least, do it for the vodka! At the end of the shoot, we will be serving  complimentary cocktails will be provided by Milano Green Vodka!

Join us later today @StandUpNY! ProTexting is sponsoring America’s most loved Comedian Wali Collins today at 4:30pm at StandUpNY .  236 West 78th New York, NY 10024 (212-595-0850)for a free comedy show. If you want to be part of the audience RSVP at  http://viralcomedy.splashthat.com/